In this exercise we are asked to make 3 full length portraits at night, with the suggestion we use high ISO, long exposures and flash. As it turned out, an opportunity presented itself to work with a model, Helen, in an industrial ruin location on a very dark, heavily overcast late afternoon in October.

In the three full-length shots presented below I have used three different methods of lighting. All use a Lume Cube, a small cube-shaped rechargeable light. It has a wide range of brightness settings, a variable strobe function, and can be used as a slaved flash.

I much prefer to use a modelling light – a continuous light source – over flash. Certainly in very dark situations I find it’s far easier to position and get right. In the image below it was mounted on a tripod and placed high up to the model’s left. I wanted strong shadows, something approximating moonlight, to give a spooky feel to the scene. The industrial ruins of Chilworth Gunpowder Mills provide fabulous backdrops.

In this shot the Lume Cube has been used as a slave flash to illuminate the walls in the background. In hindsight I would have re-shot this avoiding the light falling on Helen’s head. It’s supposed to be a little menacing and would work better without that bit of  illumination.

The final of the three images uses primarily ambient light, and an exposure of 1 sec. at f5.6. Additional light was provided by the Lume Cube on it’s lowest setting to make sure the fungi stood out. I asked Helen to lean on the wall to help reduce any movement to a minimum.

During the same session there we a number of head and shoulders shots that I was really pleased with, so I’ve taken the liberty of publishing them here. All were shot with the intention of producing images that appear to have been taken at night.

In this I found that by placing the Lume Cube up in a yew tree we got shadows from the branches superimposed on Helen’s face, an effect I really love and will remember to use again in the future. 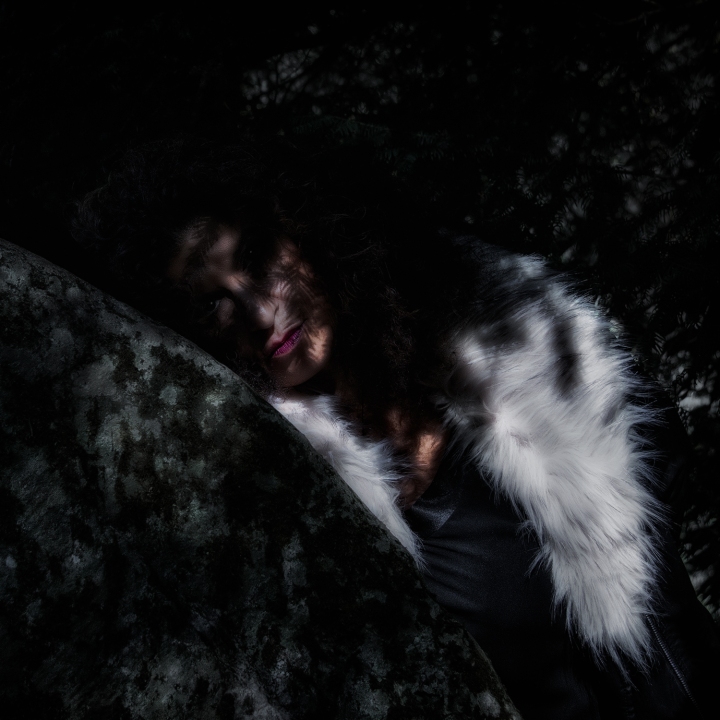 Here I used my hand to give a hard edge to the Lume Cube’s beam, as if it were a searchlight beam shining down into the ruined cellar.

This one is not quite so identifiable as being ‘at night’ compared to the others as the Lume Cube was fitted with a pale orange gel.